The peace-time draft had been legislated in 1940, and more than 16 million men and women were called upon or volunteered to serve their country in World War II. M.H. Schuetz was not a bachelor, in which case he would have been the first to be called and the last to come home. Because he was a married man with children, he was a low number in the point system and was deferred until the latter part of the war.

Virginia, his daughter, recalls how the family would go downtown to the bandstand (now the location of the new Farmer’s Market) for the selection of numbers. They anxiously waited as the lottery barrel was rolled. Numbers were picked, and some tears were shed as numbers were called. Everyone, however was very patriotic including M.H. 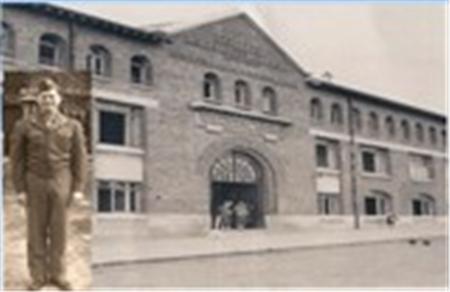 At the time, M.H. was secure in his position as office manager with West Brothers stores in DeRidder. When M.H. was inducted, he had a wife and two children and expecting a third. When the new baby arrived, he was thankful and lucky to have been granted a short leave to come home before shipping out to France.

M. H. served his European tour in Reims, France, which had been occupied by the Germans from 1940 -1944. Since he was from Louisiana, it was assumed by the military that M.H. could speak French. He did not speak French and thus was not able to converse with the people in France.

Reims, France, was an important supply base for the American military where M.H. served in the gasoline supply area. He was still in Reims when the German Unconditional Surrender was signed May 7, 1945, in General Eisenhower’s headquarters at the Little Red Schoolhouse.

It was a requirement that Americans had to spend all of their French money prior to departing for home. Many went to Paris on furlough. M. H. used it as an opportunity to shop for souvenirs to take home to his family. His daughter Virginia recalls her delight upon receiving an engraved metal half-bracelet with ribbon that tied around her wrist.

M.H. made the journey home by a troop ship from France. In the Atlantic Ocean, halfway to America, the ship developed a crack in its bow. The troops on board voted whether to turn around and head back to England for repair or to attempt repair at sea and continue to New York. The vote for New York was unanimous. Upon arrival on Christmas Day, 1945, M.H. immediately sent a telegram with the good news to his family in DeRidder. It was the best gift the family had on that Christmas Day.

The troops were allowed to come home with their personal "gear." His daughter recalls the military gas mask brought home was a treasure for little kids and was played with it for many years.

Virginia remembers the patriotism and generous spirit of people in DeRidder during wartime.

Extra bedrooms in homes were rented to soldiers and their wives. Ruth, wife of M.H. did her share. She invited soldier boys home from Sunday church and served them a good meal. It was not an easy task for Ruth who was in her early 20’s, with two toddlers and pregnant with a third. Before MH departed for war, he would organize a Sunday afternoon croquet game and invite neighborhood young ladies to participate in the game with the servicemen. The soldiers really enjoyed the home away from home.

In those days, home mail delivery was twice a day. People were very anxious to hear from loved ones. The children of M.H. were eager to get his letters as he occasionally sent Hershey bars and chewing gum in his letters from France.

Mail on Royal Street was delivered by Victor Green. Virginia remembers how worn and run over his shoes were from walking and carrying his heavy leather letter bag all day long.

Rationing began shortly after the attack on Pearl Harbor and created hardships in many families. There were ration coupons for sugar, gasoline and bacon. Coffee drinking was limited to one cup per day. One could not buy candy or gum. It would be unthinkable in today’s lifestyle to live on three gallons of gas per week with a national speed limit of 35 mph.

People became vegetarians. They were lucky to find meat other than ox tongues or horse meat burgers to eat. The good news was that nylons for women had been invented, but the seams were in the back of ladies’ hose in those days.

On the home front, drives were held for scrap paper and scrap metal needed for ammunition. Also donated to the drive were the two cannons that had been on display in front of the Parish Courthouse. Japan had seized the world’s rubber trees making it necessary to collect scrap rubber for tires. Even children picked kapok from milk weeds that was used as filling for life preservers. Everyone did their part for the war effort.

Televisions were not available in those days. The news media would tape the news from "over there” which could then be seen in the local Uptown and Realart theatres. Newsreels were a big attraction at the movies. Virginia recalls that newsmen would lie on their backs and let the tanks run over them as they filmed. It was quite exciting to see.

Over 400,000 personnel lost their lives in WWII and over 600,000 were wounded. M.H. and his family felt proud for their part in helping to save democracy.
/QuickLinks.aspx
[]